Does Your SMSF Meet The In-House Asset Rules?

Why you want to avoid in-house asset complications … 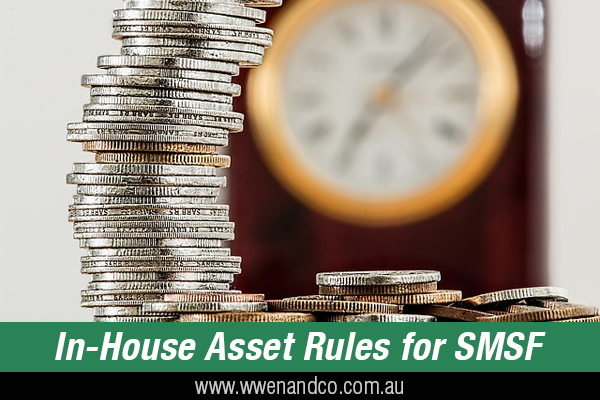 Many SMSF trustees are unsure of what to do when their fund is found to have breached the in-house asset rules. There are also some common misconceptions about these regulations that keep resurfacing.

Recent ATO statistics on the SMSF sector show the proportion of reported breaches that relate to the in-house asset rules remains high.

While it can be argued that the higher number is because the in-house asset provisions are by far the most complex and hard to understand SMSF investment rules, as a trustee it is still critical for you to improve your compliance to prevent the substantial penalties imposed for breaching these rules.

What is an in-house asset?

An in-house asset is a loan to, lease to, or an investment in, a related party of the fund.

The term “related party” is relevant for an SMSF for the purpose of ascertaining whether an investment constitutes an investment in an in-house asset.

Whether or not a particular investment is an “in-house” asset of the fund is important because as a trustee you must not invest in assets that cause the value of the in-house assets of the fund to exceed 5% of the total market value of the fund’s assets.

How does the limit of in-house asset work?

This low percentage was mainly designed to limit the use of fund assets by related parties to protect the retirement benefits of members.

Perhaps one of the most important points to note is that the market value ratio must be tested at June 30 each year, as well as during the course of the income year that a new in-house asset is acquired by the fund.

What will happen if I exceed the in-house asset limit?

Each trustee of the fund must ensure that the steps in the plan are carried out within the next year of income.

Other provisions of the in-house asset rule

Another provision of the same legislation applies during the year when a new in-house asset is acquired, and prohibits the acquisition of an in-house asset if the market value ratio already exceeds 5%, or, if this level is not exceeded, applies when acquiring an in-house asset that would cause the ratio to exceed 5%.

This means a trustee is only allowed to acquire an in-house asset provided the percentage of the total in-house assets involved does not exceed the 5% limit.

Another noteworthy point is that the trustee can only sell/dispose of an asset that meets the definition of an in-house asset if the level of 5% is exceeded at the end of a financial year. This is an important consideration that is quite often misunderstood.

Exception to the in-house asset rules

Like many rules governing SMSFs, there is a range of exclusions and transitional arrangements that specifically exclude certain investments in related parties from being considered an in-house asset, including, but not limited to:

Other consideration for in-house assets

Consequently, an SMSF cannot lend money or provide any other financial assistance to members and/or their relatives even though the value of the loan may not contravene the in-house asset rules (that is, being less than 5% of the fund’s value). This is because there is no allowable limit under the superannuation law when it comes to loans to members or relatives of members. In order to rectify this contravention, the loan must be repaid in full to the SMSF.

In addition, an SMSF loan to a related trust/company would not be prohibited under superannuation laws (subject to 5% in-house asset rule) on the assumption that the loan is not made to indirectly facilitate loans/financial assistance from the trust/company to fund members and/or their relatives. Otherwise, the fund may be in breach.

This part of the legislation is black and white; it outright prohibits the lending of money directly or indirectly to a member or a relative of a member regardless of the terms.

Case of in-house asset breach or not?

Assume an SMSF lends $10,000 to the family company (a related party), which represents less than 5% of all fund assets. The SMSF loan is supported by a written loan agreement, at a commercial rate of interest, with the capital to be repaid in three years.

Shortly after that, the company provides financial assistance to members of the fund by lending them $10,000 at a commercial rate of interest. The fund members use the $10,000 to cover personal credit card debt.

At face value, the loan would be in accordance with the in-house asset rules. In this case, there is however a clear breach as the company uses the money of the fund to facilitate loans from the company to fund members. In other words, financial assistance using SMSF resources has been indirectly provided to members. The investment is not allowed, and thus the loan must be repaid in full to the fund.

If, on the other hand, the family company had used the $10,000 to acquire machinery or equipment for the business (instead of using the money to satisfy a personal debt of fund members), there would have been a completely different result. In these circumstances, the loan to the company would not cause a contravention and would therefore be allowed.

If you have any SMSF concerns or queries, please contact the accountants at our Epping office