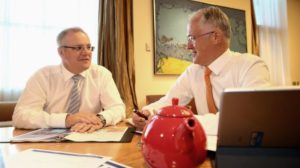 On the day when the Reserve Bank of Australia (RBA) has cut Australia’s interest rate to a record low, Treasurer Scott Morrison has delivered his first Budget (the government’s third) at 7.30pm on 3 May 2016.

The Budget sets out the government’s economic plan for Australia to transition from the mining investment boom to a stronger, more diversified new economy.

The government states it will do this by:

The small business entity turnover threshold will be increased from $2 million to $10 million from 1 July 2016.

The increased threshold means businesses with an annual turnover of less than $10 million will be able to access existing small business income tax concessions including the:

The increased $10 million threshold will not be applicable for accessing the small business capital gains tax concessions.

These concessions will remain available only for small businesses with a turnover of less than $2 million or that satisfy the maximum net asset value test.

The unincorporated small business tax discount will be increased in phases over 10 years from the current 5 percent to 16 percent.

First increasing to 8 percent on 1 July 2016, the discount will be available to individual taxpayers with business income from an unincorporated business that has an aggregated annual turnover of less than $5 million (also an increase from the current small business turnover threshold of less than $2 million ).

The existing cap of $1000 per individual for each income year will be retained.

The gradual increase is intended to coincide with the staggered cuts in the corporate tax rate to 25 per cent.

From 1 July 2017, all small businesses with less than $10 million turnover will more easily be able to classify transactions, and prepare and lodge their business activity statements.

A trial of the new simpler reporting arrangements will commence on 1 July 2016.

The company tax rate will be progressively reduced to 25 per cent over 10 years.

A lifetime non-concessional contributions cap of $500,000 will be introduced.

To ensure maximum effectiveness, the lifetime cap will take into account all non-concessional contributions made on or after 1 July 2007, from which time the ATO has reliable contributions records, and will commence at 7.30 pm (AEST) on 3 May 2016.

The lifetime non-concessional cap will replace the existing annual caps which allow annual non-concessional Contributions of up to $180,000 per year (or $540,000 every three years for individuals aged under 65).

The current restrictions on people aged 65 to 74 from making superannuation contributions for their retirement will be removed from 1 July 2017.

People under the age of 75 will no longer have to satisfy a work test and will be able to receive contributions from their spouse.

Currently, there are minimum work requirements for Australians aged 65 to 74 who want to make voluntary superannuation contributions. Restrictions also apply to the bring-forward of non-concessional contributions. In addition, spouses aged over 70 cannot receive contributions.

The government will remove these restrictions and instead apply the same contribution acceptance rules for all individuals aged up to 75 from 1 July 2017.

The measure will allow people aged 65 to 74 to increase their retirement savings, especially from sources that may not have been available to them before retirement, including from downsizing their home.

From 1 July 2017 all individuals up to age 75 will be allowed to claim an income tax deduction for personal superannuation contributions.

The income threshold for the receiving spouse (whether married or de facto) of the low income spouse tax offset will be increased from $10,800 to $37,000 from 1 July 2017.

A balance cap of $1.6 million on the total amount of accumulated superannuation an individual can transfer into the tax-free retirement phase will be introduced from 1 July 2017.

The low-income thresholds for the Medicare levy and surcharge will increase from the 2015-16 income year. The changes are in the Tax and Superannuation Laws Amendment (Medicare Levy and Medicare Levy Surcharge) Bill 2016.

Diverted profits tax to be introduced

A 40 per cent diverted profits tax (DPT) on the profits of multinational corporations that are artificially diverted from Australia will be introduced for income years commencing on or after 1 July 2017.

Transfer pricing rules to be strengthened

The strengthening of transfer pricing rules is covered by Actions 8 to 10 of the OECD’s Action Plan on Base Erosion and Profit Shifting.

GST and other indirect taxes

Tobacco excise and excise -equivalent customs duties will be subject to four annual increases of 12.5 per cent from 2017 until 2020.

GST will be extended to low value goods imported by consumers from 1 July 2017.

In the 2015-16 Federal Budget, the government announced a voluntary Tax Transparency Code.

The Board of Taxation released a discussion paper on the Code in December 2015, and recommended that businesses with aggregated TTC Australian turnover of at least A$100 million but less than A$500 million should adopt Part A of the Code